After a week of beach hopping and temple runs in the Island of Gods, we were lucky enough to catch the Balinese new year on the final days of our honeymoon. I was aware of the Silent Day when I planned out my honeymoon, but I didn’t really had the time to learn about the festivities for the new year. Imagine my excitement when the day came and I realize that I will be witnessing a one of a kind celebration in Indonesia. 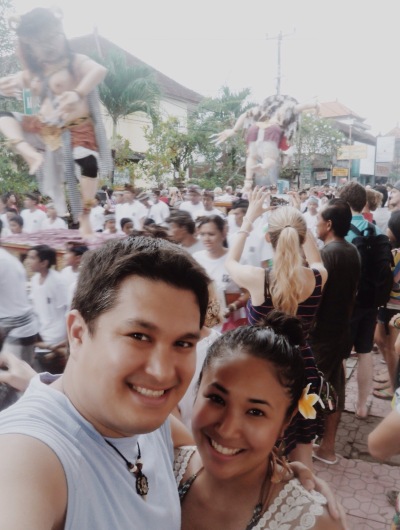 It was the end of March. Our day started earlier than usual. We were told about the festivities that were expected for the day and came along with it is the traffic that we refused to deal with as this is our last full day out exploring the islands. Our driver, who claims that his religion is positivity, promised us that we’ll be able to do everything and go everywhere we wanted until 4pm. I was determined to even hike to a waterfall, which we ended up skipping that day as we began to see a build up of traffic in that direction.

We were already in Ubud as this was our final spot for our honeymoon. We spent the week at Nusa Dua and I specifically planned Ubud to be our final spot for the Silent Day. We booked a wonderful villa right in the center of Ubud, about a 3 minute walk from Monkey Forest. The down part about being in Ubud for the new year that I wasn’t aware of is that most establishments were closed– including the best babi guling restaurant in the island.

Despite all of our positivities combined together, we had to end our day a little earlier because people are beginning to block the roads for the purpose of the parade that will be taking place later in the afternoon. We had no choice but to head back to our villa a little after lunch, which I was okay with since I started getting a little excited for the festivities. We were able to explore a little bit of Ubud, mostly because I was determined to find any babi guling restaurant open. It was a shame I didn’t see this coming, and if I knew better, I would have went there already since we were in Ubud a couple of days ago. We stopped by the Monkey Forest again, but since it was a holiday, the park rangers (or securities?) we’re gone by then, so we didn’t dare go inside all by ourselves. Those monkeys are too mischievous and we couldn’t put our guards down. I’ll share that story another time.

It started to rain, and we were concerned if this would stop the parade. However, we were told that it always rains on the afternoon of new year, and it clears up just right before the parade begins. I was very bewildered by this. How does that just co-incidentally happen every year? 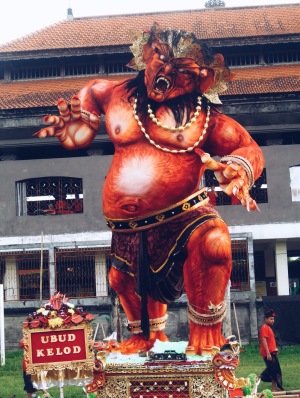 Around 5pm, people started heading over to the soccer field and as advised by our receptionist, it’s the best place to be at for the parade. When we got there, there were a number of ogoh-ogohs being prepared already. Ogoh-ogoh are huge mascots built from paper which represents different evil characters. There were lots of them in different sizes, ranging from big to ginormous.

It took a while before the parade began so we had a few drinks and we roamed around looking for a spot. There were lots of tourists gathered around by this time. I was really glad that we happened to be in Ubud for this. There’s parades going on everywhere in the island, but we were told that Ubud has one of the best parades. To experience this in such a cultural environment made it even more authentic.

The energy was so magnetic during the parade. There were even more ogoh-ogohs! They have to make them dance while carrying it. There different types and different colors. There were drum beats, dancing, and a little bit of singing. People of all ages are involved in the parade, mostly younger boys and men. There’s something about witnessing a foreign culture practicing their traditions that ironically makes me feel a little bit more connected to them. What would you call that feeling?

The parade ended just right before dark. We went back to our villa to rest since it’s been a very long day for us. We were informed that the celebration isn’t over and that we should head back to the center of the town by 7pm. I was actually ready to skip this and just chill inside and maybe go for a dip. I wasn’t really expecting much, but my husband insisted that we go. And boy was I glad that he did, or we would have missed out big time. 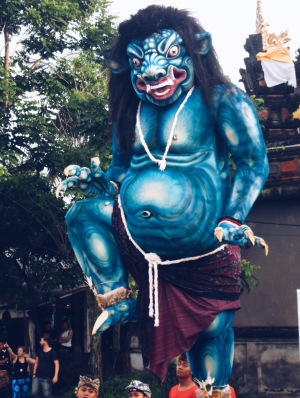 At night time, the ogoh-ogohs are once again paraded. We got a really good spot right in the middle of the town. This time, there were even more people. We kept getting pushed around since the enormous ogoh-ogohs are “dancing” in a very aggressive way. They move them around in different directions that it could actually hurt people if there were no security to watch everything. They bring them right in the middle to do a dance while a chanting in the microphone also began. By this time, the energy was unbelievable. Everyone was into it. You can tell how important this event is for the locals because they weren’t doing this for the tourists, it was purely for their traditions. At one point, one of the ogoh-ogoh hit the the circuits causing a loud explosion and shutting down the post lights. That didn’t stop the festivity. It kept going, with or without electricity. 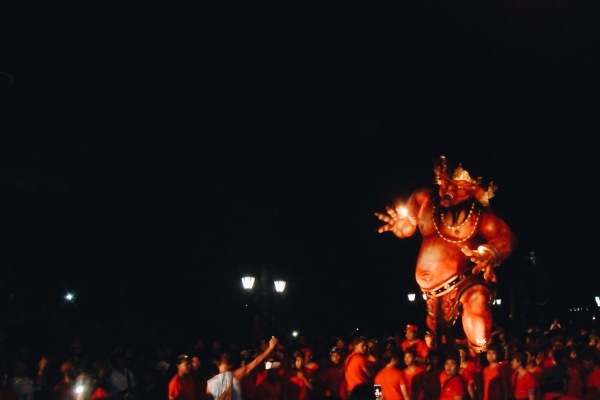 After the ogoh-ogoh, the traditional Balinese dance began, ending with a story of a prince that I couldn’t really quite understand because all the singing and chanting is in their local language. I can tell you that it was quite spectacular to witness it in all its bonafide aspect. It lasted pretty long, and by the time it ended, we were starving. 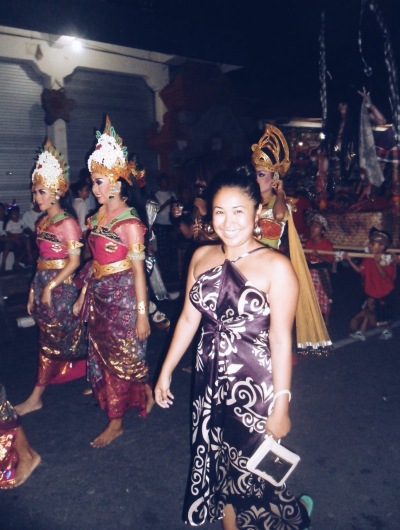 Everyone started taking off right after, and we had dinner across our hotel. I had one of the best pork ribs I’ve ever had (the other best one was from the day after). We headed back to the soccer field right after to see if we can catch them breaking the ogoh-ogoh. It’s a part of the tradition to destroy the heads prior to burning them. This signifies cutting off all the bad spirits from the previous year and looking forward to an evil-free year ahead. We caught some of them, but we decided to head back to our villa before they start turning off the lights. After all the festivities, all the lights in the streets are expected to be turned off to begin their practices for SIlent Day, which I’ll tell you all about later on.

It was a long day but it was well spent. I was almost ineffable from disbelief that we were able to experience this right at the end of our honeymoon. It was a nice little surprise we both weren’t expecting. Although we still had one day left, it was going to be calm and quiet since no one is allowed outside on Silent Day. I’ll tell you now that it was spent perfectly too.

44 thoughts on “A Balinese New Year”