Monsoon season can put me in a really melancholic mood sometimes. Not in a depressive-because-of-life kind of way, but in a depressive-because-I-can’t-explore mentality. So after a two-week nonstop rain and typhoon in July, I took advantage of the weather two days after the sun decided to show. I’ve been meaning to hit up a nearby river known as Layon Bilog, and I figured two days would be enough for the water to get clean again and for the mud to dry up, and that’s essential because it’s going to take a short hike to get there. But of course as my wonderful luck would have it, the instant I decided to go, the clouds started covering the sun once again. Thankfully, it didn’t rain, although it remained gloomy. Good for me, because I already reached my max tan limit.

Layon Bilog is located at the foot of Mt. Talamitam, in Nasugbu, Batangas, just about half an hour away from where I live in Tagaytay. I did hike Mt. Talamitam with my husband a couple of weeks before this (read here), but because rain started to catch up to us, we decided to skip the river. I’m glad we skipped it that day because after that two weeks of rain, I probably would have pulled my hair out if I couldn’t find a nearby adventure to pursue.

So off I went on a Wednesday by myself. It only took one short bus ride to get to the drop off point. Luckily, the guide from when I hiked the mountain was there that day, and I had him come with me to the river since getting lost would not really be all that fun. I don’t know about you, but getting lost in a metropolitan city is far different from getting lost in the woods. Or so I presume. Either way, I wasn’t going to risk it. My predictions were right and it was no longer dirty or muddy from the rain. It takes just a short 20 minute hike to the river, but I had to hike through the rocky terrain. It wasn’t a hard hike, but it wasn’t completely easy. I was getting tired by the time I started to see a glimpse of the river. 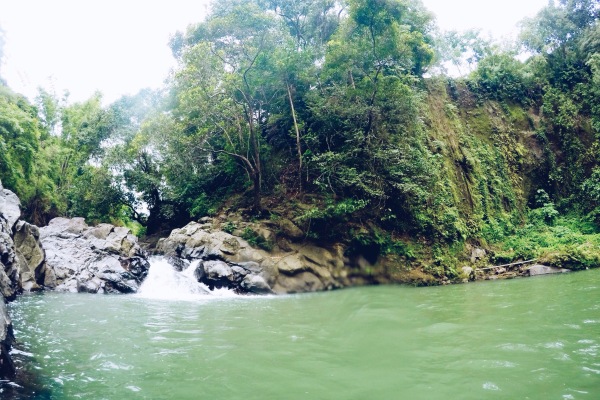 The shades of black and gray rocks were very appealing to me. Being in the middle of the jungle was definitely all I needed to get out of that seasonal Debbie Downer mood. The great thing about the clouds deciding to show up is that it wasn’t hot at all. Mind you, I was still sweating, but that just confirms the hard work I did climbing all that rock! When I reached the river, I knew I had to jump in the water. Although it wasn’t the clearest fresh water I’ve been in, it was clean and inviting enough. Tom, my guide, showed me a rock where jumping off is possible and of course I had to do it. I mean, I did have my usual 5-minute freak out before jumping, but it was a good, much needed jump! I would have done it again but climbing up would be so tiring!

There’s a small sandy area where people could probably have a picnic but I didn’t bother going there because I’d rather be in the water. The water was pretty deep, which I like. It was warm and I didn’t have a problem swimming around. I did feel some fish trying to nibble on my feet though. Though it’s just a river, there are some mini waterfalls (or so I’d like to call) that I had to sort of chase for myself. I’ll let some of my pictures speak for itself, but I must tell you now, SELFIE ALERT! I only had my gopro with me so I didn’t really take detailed shots of the place, but I’m hoping the selfies will do. 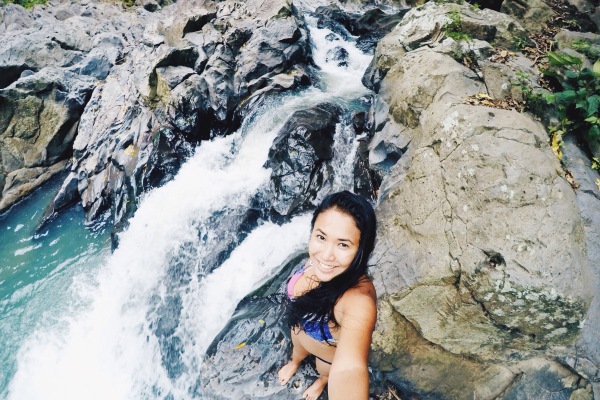 Also, did I tell you what the best part is about hidden gems like this? THERE WAS NO ONE AROUND. Except for some locals that we came across during the hike there, since we did pass by a residential area, I had the entire river to myself! Eventually though, I had to force myself to leave already because it’s started to look gloomier. Nonetheless, it was a much needed day.

And this, my friend, is one of the many reason why I choose to live outside the city. For now at least. 🙂 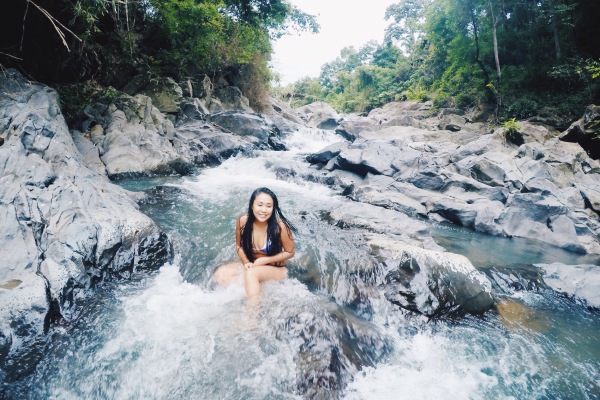 To get to this beauty, take a bus headed to Nasugbu and tell the conductor to drop you off at Brgy. Bayabasan. You can literally just ask the locals at the small eatery there to point you in the direction of the river, or you could hire a guide like I did to take you there. A guide to hike the mountain will cost a minimum of 300php, so you don’t need to pay a lot because the river is much, much closer, and a lot less easier to hike. I paid him 200php because he was nice.

75 thoughts on “Layon Bilog River: A Mini Adventure After The Storm”