There comes a time in a girl’s life where she has to grow up and chase her dreams.

But with the exception of growing up, I did just that, and I became a mermaid.

Contrary to my love for Morticia Addams and my other odd fascination such as cemeteries and torture museums, I too, had dreamed of being a mermaid. Yes, the beautiful ideals of the beautiful long-haired creatures with the vibrant fins and adorable sea accessories. I’ve always been a little island girl and I find nothing more satisfying than a day spent in the water under the sun. The ocean will always remain as my Disneyland and the sand and the salt water will always be therapeutic to me. A bit of a heliophile as well, the idea of living a mermaid’s life is the perfect fantasy for me. Before you assume that my favorite movie is The Little Mermaid (umm Aladdin, duh!) or that my favorite Disney princess is Ariel (#TeamPrincessJasmine), let’s just agree that every girl has wished to become a mermaid at some point in their childhood. In my case, in my entire adulthood as well.

Without any shame in my soul, my friends and I signed up at Mermaid Academy in Boracay to make our dreams come true. When you’re surrounded with like-minded people, giving a damn rarely ever matters. And in this case, why should it? Mermaids are freakin’ awesome! Located at Station 1 in Boracay, we booked an appointment for the next morning to be sure that we don’t run out of the fins or for our plans to go down the drain. Renting the fins with a 30-minute basic photo shoot session (with your own camera) cost us around $18 each, although we do get half an hour each, which sums up to an hour and a half. While most people think this is a waste of money, to us, we are grown women and we can do whatever we want. If we wanted to put on a fin, pretend like mermaids, and take pictures in a public beach, then we will. So we did.

Mermaid Academy also offers a course to teach you how to legitimately swim like a mermaid underwater. You can also set up an appointment with them to take underwater photos. That is of course if you’re skilled enough to swim like a mermaid. I actually plan to take this course one of these days. Why, you may ask. Because I do what I want.

This is one of the things I love about Boracay. Despite the ugly reputation people like to give it, the island is without a doubt coming up with more activities to cater to people of all ages. Though it is obviously a part of its commercialism scheme, I’ve come to accept the fact that Boracay has become that kind of island now. Coming from a sucker for virgin beaches, I can only tell you how much I wish to have witnessed Boracay at its prime in the 80’s and 90’s.

Now speaking of its commercialism and ridiculous amount of tourists in the summer, we actually did get approached by a bunch of them to take photos with us. We were nice at first, but by the time the third set of tourists came, we were over being nice and declined letting them take pictures with us. We may be some freaks on the beach, but these freaks are on a time limit!

Anyway, I’ll let the photos speak for itself… 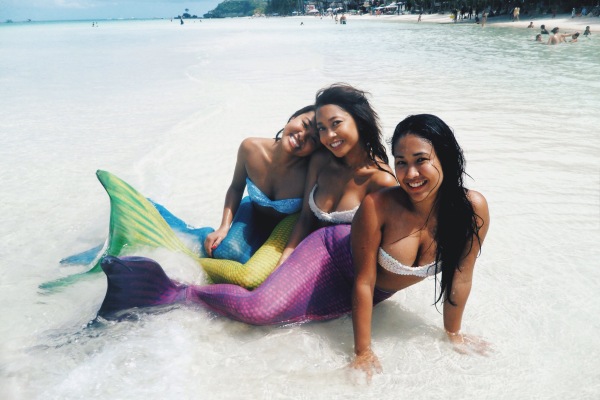 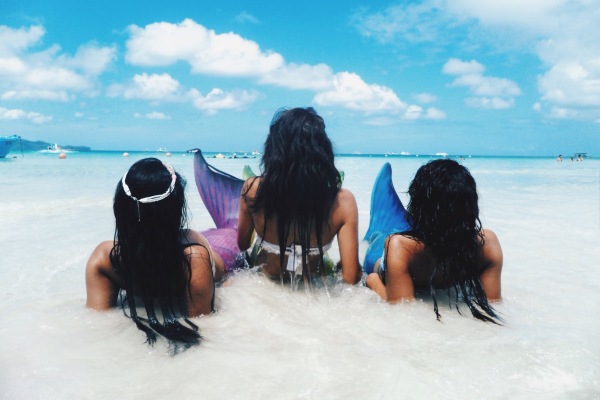 It turned out to be a wonderful morning. To be able to play dress up right on the beach is a pretty cool memory. In all honesty, we wanted to do this for the sake of the pictures, but we ended up having so much fun splashing around in the shore. Next time I’m in the island, I actually want to do this again just for the sake of it. Judge me if you want, but sometimes, some girls just refuse to grow up. And that’s okay.

8 thoughts on “Dreams Do Come True At Mermaid Academy”