By now, you should already know how I do. Hidden gems. Offbeat paths. Secret spots. I’m all about it. Never mind that I would go to any tourist hot spot with no problem, but I would prioritize the lesser known finds first. I would give up my bachelors in Nursing in a heartbeat if they ever come up with a profession for finding hidden gems. But until then, I’ll keep doing it in my spare time. 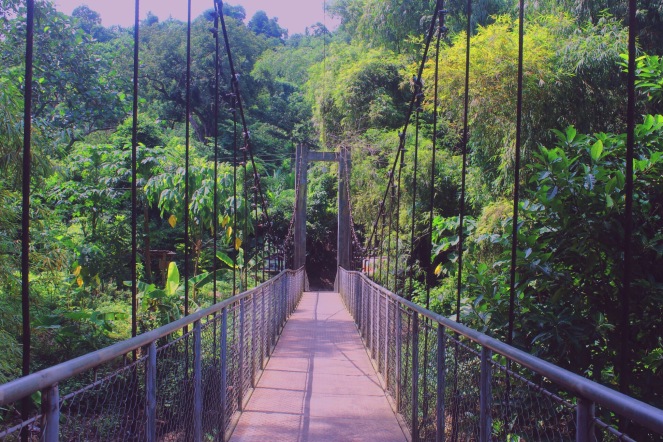 My constant love for the beach was struggling during the monsoon season. And because of that, I turned to hiking to keep me occupied. If the ocean is my lover, the mountain would be my mistress. But even with a side chick love affair, I just couldn’t resist being near the water. But because planning at such an unpredictable time of the year wouldn’t be smart, I researched about places nearby where I can just spontaneously go to if the sun decided to show up. That’s how I came across the idea of journeying my way down to Ambon-Ambon Falls. 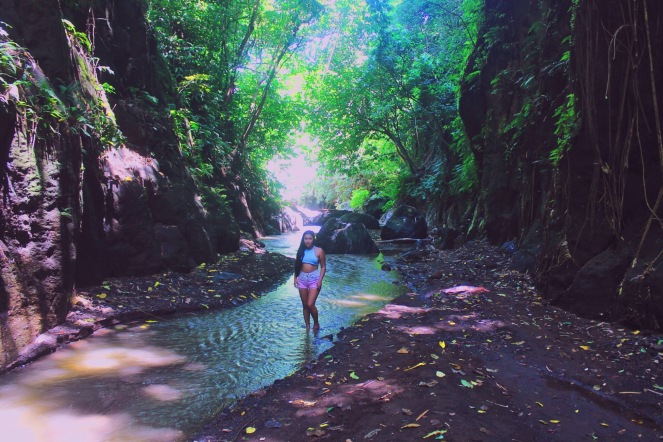 Located in Laurel, Batangas, Ambon-Ambon falls is only at least an hour away from where I live. Granted that we’d be commuting, it took us just a little more. But if we decided to drive down there, it would have taken us less than an hour. Either way, the instant I found out about it, I knew where I was going the instant the rain stops. So right after a typhoon, I dragged my husband to a little adventure. Now, because I had a hard time researching the internet on how to get there, I’m going to write this detailed information so you don’t have to waste too much time looking into it like I did. 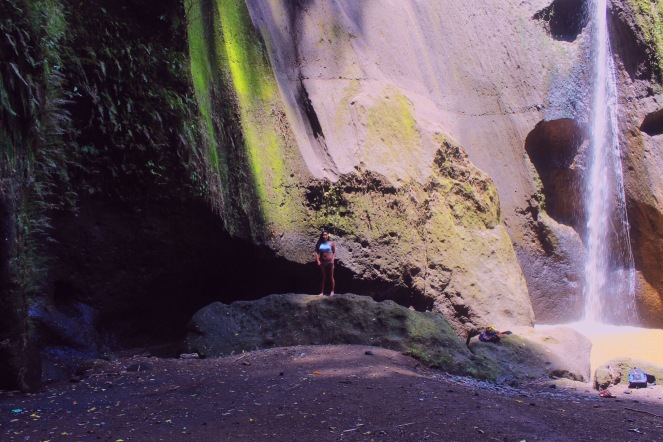 Ideally, you can take a bus to Tanawan, Batangas and take a jeep to Laurel. But you can also go there on a short side trip from Tagaytay. Coming from Tagaytay terminal, we took a jeepney to take us to the city market in hopes of finding another ride there to take us down to Batangas. We’re basically heading to the same road we took to hike Taal Volcano, and we could have taken a tricycle. However, we wanted to do it cheaper though, so we looked at the other options. Turns out, we should have taken the jeep all the way to Ligaya Drive, and from there, there are jeeps waiting to be filled up to head down the road. If you’re in a hurry, your best bet would obviously be the tricycle, which would cost 200php ($4) one way. The price of the jeepney ride on the other hand, depends on how many passengers there are. In our case, there were only 4 of us, and the driver asked if we were willing to pay 100php each and we’d be able to leave asap. We agreed, and although it cost us the same as the tricycle would, it was a more comfortable journey. (READ: Hiking The World’s Smallest Active Volcano) 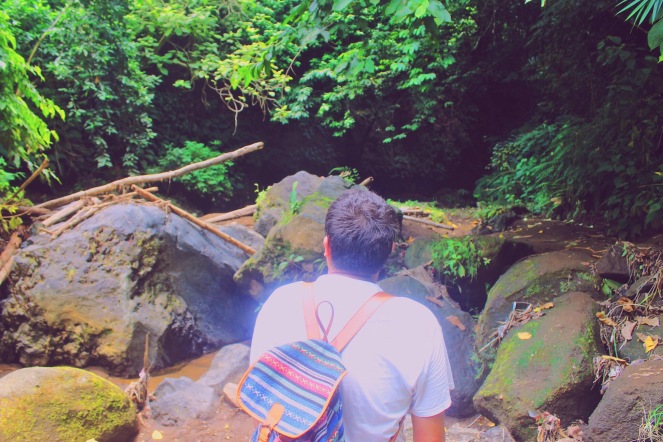 The ride down the road took at least half an hour. My eyes feasted on beautiful views of Taal Lake as we were headed down the mountain. We were dropped off at a highway where we were to catch another jeep that would take us to Laurel. From there, it took another half an hour. And from the Laurel drop off point, which I believe is the town center, we took a tricycle for 60php one way to take us to the jump off point to the falls. He agreed to come back for us in a couple of hours so we didn’t had to worry about a ride back.

There were two waterfalls in the area, as a matter of fact. We were able to pass by Magalaslas Falls as well since it was along the way. It’s a much smaller waterfall, but there’s a pool at the base where you can swim in. By the time we reached it, there was a group of locals dominating the area, so we continued heading for Ambon-Ambon instead of lingering around. We figured by the time we’re done with Ambon-Ambon, they’ll be gone. I mean, this is essentially why I opt for lesser known places– to avoid the crowds. Although, one group wasn’t that bad at all. 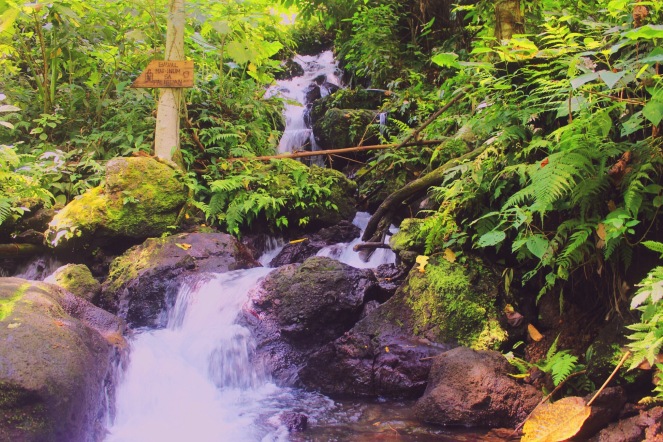 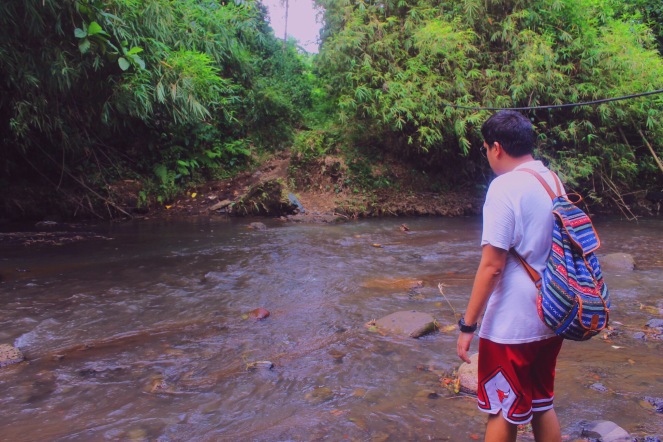 There were no signs leading to Ambon-Ambon, so we kind of made a wrong turn but we easily found our way back. The hike was really easy. There were very minor ascends or descends and there were no wild terrains to deal with. I wouldn’t say it was a walk in the park, but it was a nice walk. We passed by some rice fields, some houses were locals lived, plenty of coconut trees, crossed a few streams, and finally, we reached the canyons. This means we were near the waterfalls. 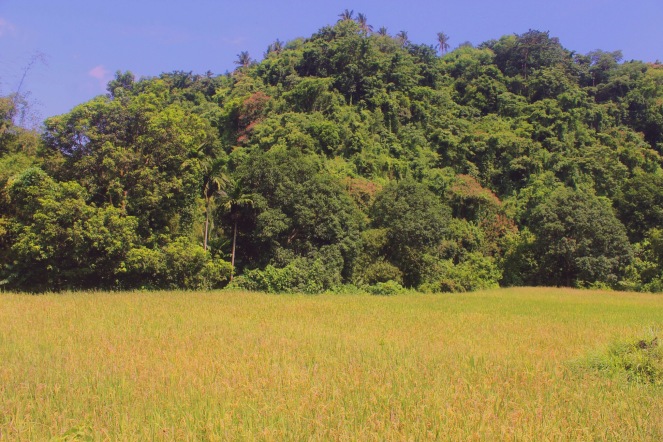 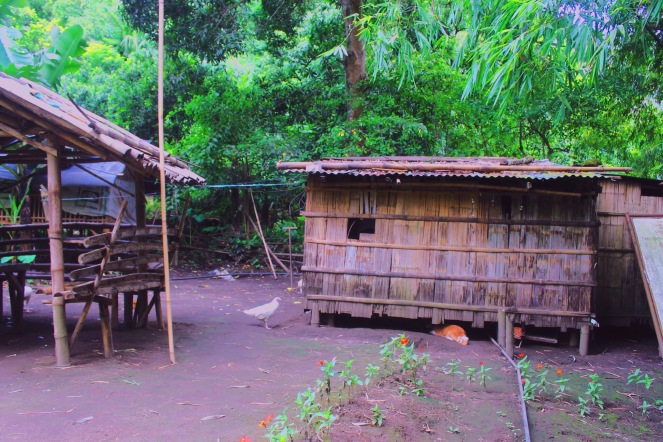 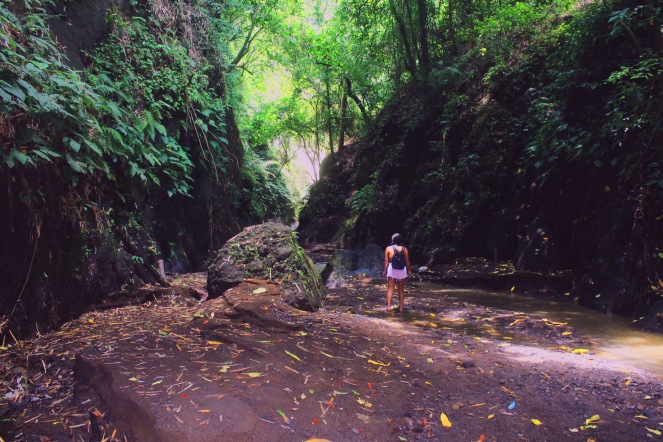 It was a spectacular sight! A little magical actually, sort of like a scene from a fairy tale. I was also delighted by the fact that it was a shaded area because of the huge boulders around. As we were walking along the canyons, we heard prominent voices, and soon enough, we come across a big group of young couples leaving Ambon-Ambon falls. That meant that we will have Ambon-Ambon to ourselves, but they’ll most likely be at the other falls later. As you can already tell, I’m spoiled when it comes to having places to myself. I’m committed to finding out the best days to go to avoid as much people as I can. I try not to settle for places with big crowds, so this was better than having to deal with even more people on the weekend. (READ: Just A Waterfall Away) 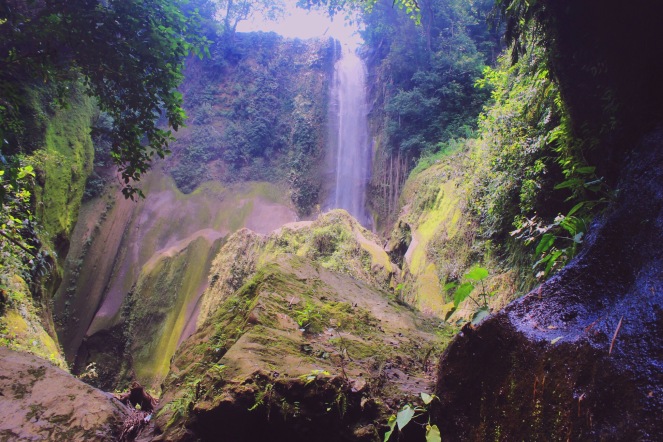 We climbed a few rocks and before we know it, we finally caught sight of Ambon-Ambon falls. “Ambon” literally means drizzle in Tagalog, and seeing the water flow down yet another boulder, it looked as if these eternal drizzle holds a dear secret right up there. 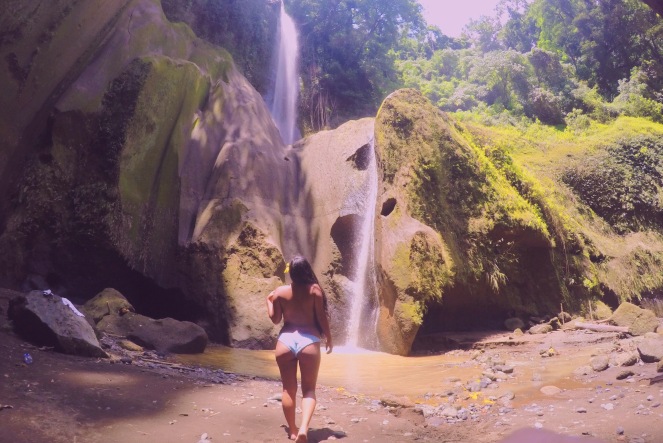 We walked a bit more to get closer to the falls and the pool. The original falls flows down from the top of the boulder, but another waterfall is formed as water flows down to the ground, making a smaller pool as a result. Unfortunately, since we came only two days after a typhoon, the water was still very brown. 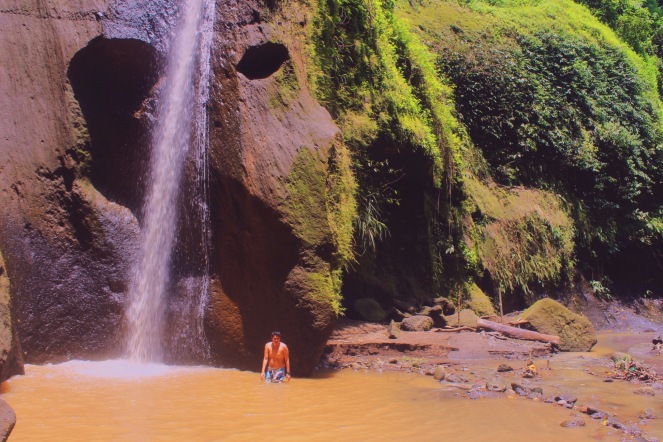 I was bewildered at what the top of the boulder looks like. You have no idea how much it was killing me to know what was up there. I’m sure all that water flowing down has formed some kind of pool, but I guess I’ll never know. I’m pretty sure some locals have attempted to climb up there. I was even told that a few has died there, but it doesn’t stop me from wondering what secret lies among these boulders. Sadly, I may never know. But I was glad to get close enough to nature’s little secret. 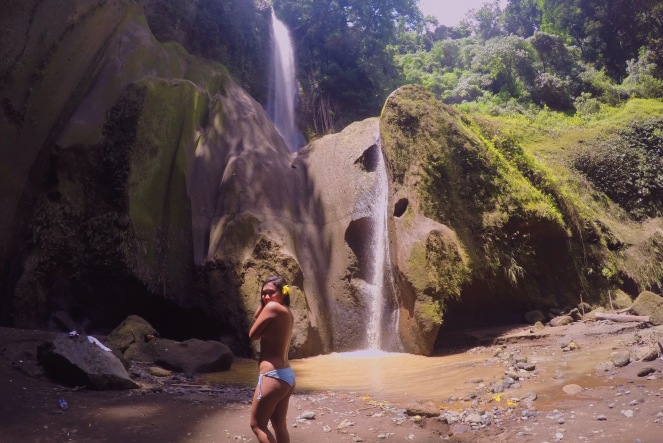 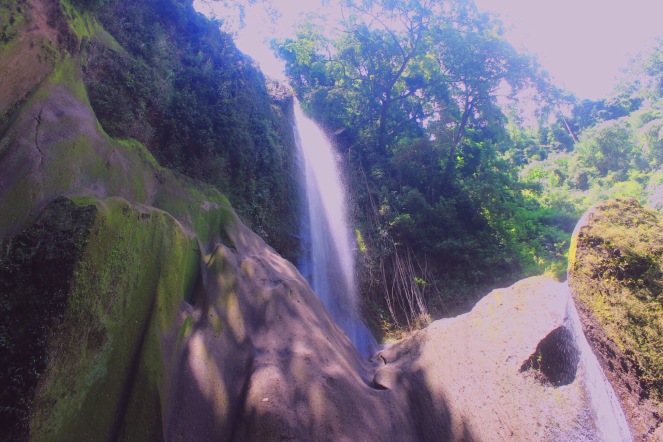 We made our way back, and this time, I was able to take better pictures of the canyons because there were no more groups walking along. The site was even better this time. The light and shade brings out an enchanting effect that the entire walk felt so dreamy and mystical. I might have even appreciated this canyon more than Ambon-Ambon falls itself. 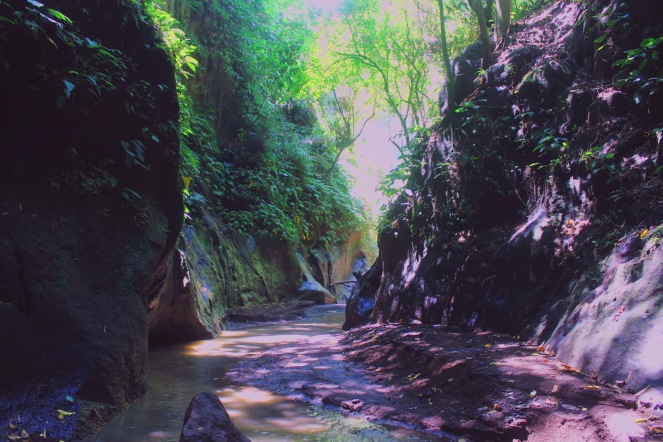 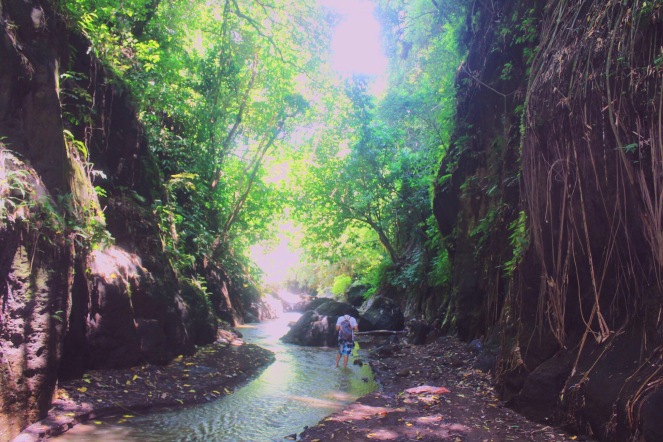 There were still a few more couples hanging out in Magalaslas by the time we got there. As I’ve predicted though, the first group that we came across were gone. We didn’t let anyone get in the way though, so we found a spot at the top, away from the pool, to take a few snap shots. Magalaslas Falls, although quite small, is actually a pretty spot. The water falls down in a cascade, emulating a stairway effect. I was no longer interested in swimming (because, people) so we hung out for a bit and snacked a little. We ended up leaving a little sooner than planned because I started itching from bug bites. It was good that we did because I think we caught the last jeep that heads out of Laurel. 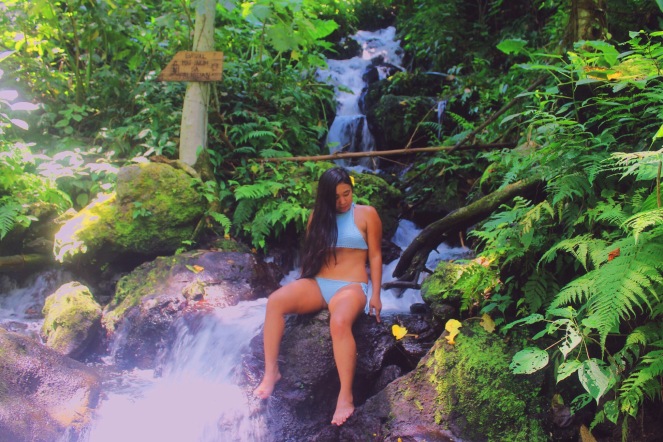 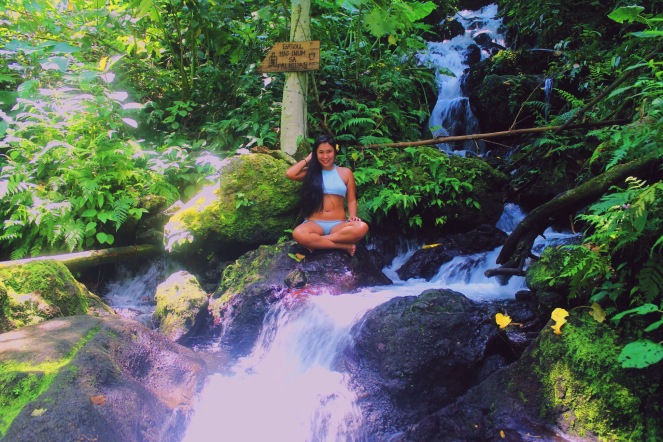 When we got to the final jeep for Tagaytay, the jeep was empty but we waited only less than an hour before there were enough passengers. It costs more to go up because it’s very uphill so I presume it takes a lot of gas usage. If I remember correctly, I think we paid at least 50php (-$1) for our fare. 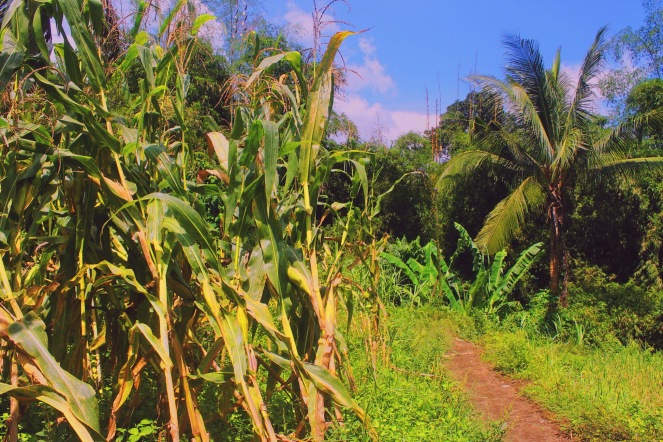 Although it wasn’t a life-changing trip, it was still very enjoyable. Chasing waterfalls is always a good idea and it’s always nice to find places near my area. The fact that not many people know about this place is a plus too. Because really, not following the crowds always leads me to the most wonderful experiences. And though this isn’t the best waterfalls I’ve ever seen, it’s still one for the books. Plus, the hike and the journey there was an adventure. 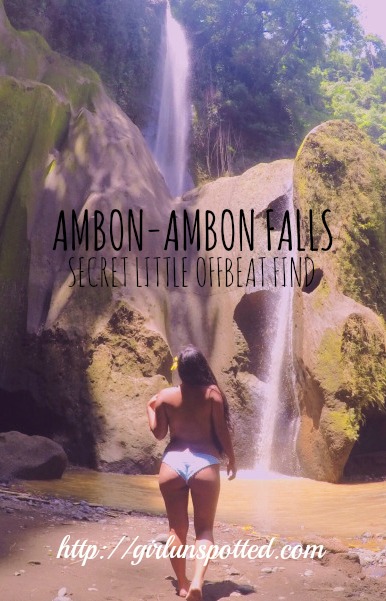