On my last post, I’ve shared with you the fact that in 2015, I fell in love with hiking. And while yes, I meant it, the truth is…sometimes, hiking really just sucks. And by that I mean, the struggle makes me want to cry sometimes. Okay maybe not literally, but if I’m being real here, there are times that I wouldn’t mind skipping the journey and just get to the destination already.

There are two accessible waterfalls near the city of Dumaguete, Philippines. I originally planned on going to both of them, but unfortunately, we didn’t have time to see the other one, which was the Red Rock Falls. What a shame because that one looked awesome too in the pictures I’ve seen. So coming from Oslob, Cebu to Dumaguete city, we kind of over-napped a little, so time was a bit of a challenge for us during our hike. I’ve read online that it was a pretty rough hike to get to Casaroro, but I must have underestimated those reviews because I went there thinking otherwise.

From Dumaguete, we took a jeep to Valencia, which took us about 20-30 minutes. If you’re going to do this, keep in mind that the jeep doesn’t leave until it’s full, so if you’re in a hurry, you’re better off with a tricycle, which obviously, would cost you more. Once you reach Valencia, you’ll need to find a habal-habal driver (motorbike) to take you up in the mountains where the jump off point for the falls is. If you’re anything like us who completely looks like a tourist, you’ll most likely be approached right away. It’s another 15-20 minute ride to the jump off, and from there, off you go to the falls. It’s easy to navigate your way there, but because the sun is setting by the time we reached the place and we didn’t have time to waste (you know, from navigating and possibly bickering), our driver served as our guide.

It’s probably a good idea to do some stretches before tackling this hike. Although the first half is easy as it only begins with over 400 steps of stairs, the other half is a lot more strenuous. Prepared to climb over rocks and to maneuver your way around slippery steps because you’ll be hiking along the river. That said, you will get wet. Originally, there was a bridge built for visitors that made it much easier to see the falls, but a typhoon completely ruined it a few years ago. Good for nature, because it limits the tourists by a lot, but bad for us out of shape travelers because we’ve got to do this the hard way. 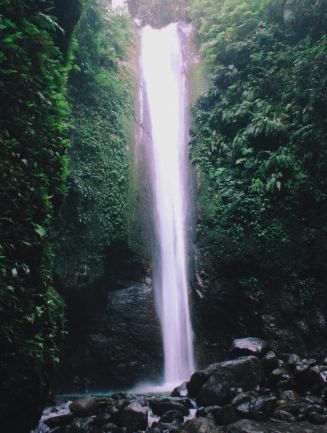 It takes only 30-40 minutes to reach the glorious falls. Perhaps that’s why I underestimated it. It’s a short hike, but little did I know, it was intense. It’s like leg day on crack. The fact that the rocks you’re climbing are immensely slippery makes it even more of brawl. But once you reach the falls, you will be blown away. I was going to say that it will take your breath away, but trust me, getting there will have you fighting for your breath already.

Casaroro Falls is possibly the most spectacular falls I’ve journeyed to. There is a basin at the bottom, and everything remains unmodified. There are no benches, no huts, no vendors… all you’ll see around you are the hundreds of rocks and trees around. Sadly, my pictures doesn’t do it any justice. I wasn’t able to document it because like I said…I was running out of breath. Nevertheless, it was pure rawness, just like how nature intended it to be. Everything is in its inherent beauty, and it was astounding. The waterfall itself is striking, standing grandly at a height of 100 feet, and the water falls down in a perfectly straight cascade. Despite the pieces of structures from the broken bridge, with its elusiveness, it stays pure, virginal, and untarnished. 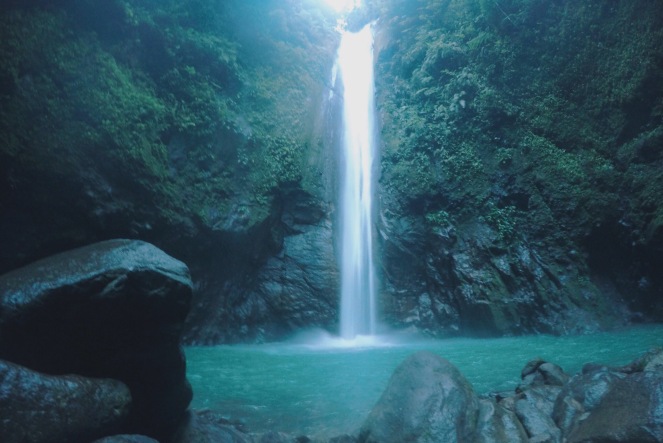 Our hike back was even worse because we had to climb the stairs. The easiest part, was now the hardest. It was dark by the time we reached the bottom of the stairs, but we were accompanied by fireflies as they led us back to the top. Now I know I sounded whiney at the beginning of this post. And I wouldn’t want to end it by boring you with an epiphany that yes, the journey was worth it. Because truth be told, I probably would have just been as astonished as I was if it didn’t take that much effort to reach. But the thing is, if it was easily accessible, I doubt it would have remained that alluring. Sometimes, just sometimes, if it isn’t hard, it isn’t worth it.

20 thoughts on “The Raw Beauty Of Casaroro Falls”