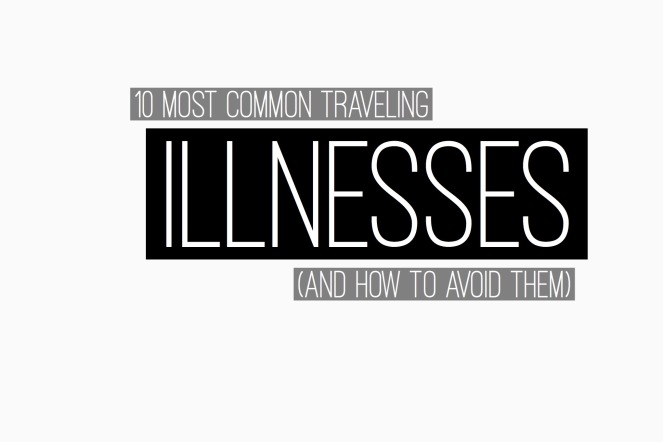 With all the beautiful things that comes with traveling, there comes the ugly side of it too. Not that it would ever stop us from going, but travel isn’t always rainbows and butterflies. No matter how invincible we feel when we’re out exploring the wild, sometimes, our body can only handle so much and it reacts like a human body normally would. It’s a wild world out there, and if you’re not very careful, you may catch something that could instantly ruin your trip. There’s hundreds of different unfortunate things that could happen to any of us while away, but with a little education, you can prepare yourself to avoid at least some of them. If you don’t already know, I’m a nurse, so it’s in my nature to educate. I’d like to introduce you to at least the most common illnesses you may come across during your travels, and together with it, I’ve included how to avoid them, AND how to deal with it in case you become a victim. Catch flights, not illnesses.

The most common of all diseases while traveling, this diarrhea causing illness can range from mild to…extremely leaky. Usually caused by a mean ol’ microorganism like virus, bacteria, or a parasite, it’s very easy to accuse the water of the food you eat as the culprit. The stomach flu can be fatal if not taken care of so don’t underestimate it. In extremely mild cases, it goes away on its own as long as you keep yourself hydrated. Otherwise, it can make you quite ill– fever, nausea, vomiting… Definitely not something you want to be stuck in your hotel for.

What you can do to avoid it:  Be wary about the food the that you eat. Unless you have a gut of steel (like me, thanks to the Philippines for that), be a little cautious.

What you can do if you have it:

“I went to Thailand and the spicy food gave me the sh*ts. I thought it was safe.”

Your stomach’s reaction to spicy food is completely different from acute gastroenteritis, unless of course the food was contaminated. When you eat spicy food, it releases a chemical compound called capsaicin, which the stomach cannot breakdown, causing an imbalance and irritation to your stomach lining and intestines. But of course the more you get used to spicy food, the less the trouble would be.

What you can do to avoid it:To avoid an upset stomach when eating spicy food, you may try balancing it out with dairy, such as milk or yogurt. Lessening the amount of your spicy food intake is also an option, but I would neverrrrr recommend that. Spicy food is too good! What do I do in this case? I take it like a champ. And suffer later in the bathroom, while losing 5 ibs. of water weight at the same time. Worth it.

This isn’t just common for travelers, UTI is so common that I’m sure you’ve had it at least once, that your mama’s had it, and your grandmama too. Nonetheless, it’s still easy to contract it when you’re traveling especially when you’re out and about in places that doesn’t even have toilet papers in public bathrooms (talking to you, Asia). Anything that gives easy access for bacteria to enter your bladder through your vagina (or the other thing, if you’re a guy) is a risk factor. That includes getting frisky in a public area! This bladder infection can be uncomfortable, not to mention painful!

“Can sex really be a risk factor for this?”

Yes. Honeymoon cystitis, which is basically sexually related UTI, is as real as it gets. It’s really not that hard for bacteria to get in there, you know?

If you’ve never had Sex Ed, then let me tell you now that the possibility is endless. Health Ed probably introduced you to some, but not as comprehensive as Nursing school did, and trust me, it really is something to cringe about. Nobody wants a dirty vagina, but nobody wants to be lonely either. So you do you, but stay protected and don’t be stupid. Guys, the variety of STD’s are endless. Chlamydia. Herpes. Gonorrhea. Hepatitis. Syphillis. And if you’re really unfortunate, HIV and AIDS. It’s a scary world out there.

What you can do to avoid them: Because this is such a broad topic, I might have to write a separate account for this. But here’s a few basic pointers to avoid sexually transmitted diseases;

What to do when you already have it:

4.) Influenza aka The Flu

It started off with a sneeze. Or an itchy throat. Or something you just thought of as allergy. Then you get the fever. And muscle pains. Chills. Sweats. Headache. Fever. And you feel like complete sh*t. Flu is so common, yet it could easily get the best of you. And remember, there was one time in history where it killed thousands of people.

What you can do to avoid it:They key is to get your immune system up so it can naturally fight off the virus. It’s the most reliable preventive measure.

What to do if you already have it:If you somehow manage to catch the flu while traveling, the best thing that you can really do is to take your prophylaxis like Tamiflu (preventive medicine) before it gets worse. Watch out for early signs such as itchy throat, sneezing, feeling a little clammy, or weakness.

The way I see Typhoid Fever is similar to my perception of food poisoning except acquiring it is a lot more gross. It has similar signs and symptoms. However, TF transmission is via oral-fecal, which means you have ingested a strain of fecal matter infected with Salmonella typhi. You can get this from eating poorly prepared food– by dirty hands, or perhaps uncooked meat.

What you can do to avoid them: Just like Traveler’s Diarrhea, it’s all about what you put in your mouth.

What you can do if you already have it: You must see a doctor. Your stool will be tested to confirm you have Typhoid Fever, so if your diarrhea is accompanied with vomiting, fever, generalized pain, and you’re overall starting to feel lethargic, go see a doctor so you can receive proper treatment.

This is especially prevalent in the summer. Damn those mosquitos! It’s those notorious ones that are known to spread this disease. So if a mosquito who happens to bite you is a carrier, signs and symptoms start to show 4-10 days later. Though it can be treated at home, it can get extremely serious and fatal too. The earlier you diagnose it, the better for your health.

What you can do to avoid it: MUST avoid those sneaky little mosquitos! If you’re going to a place known for them, it doesn’t hurt to keep your guard up. Luckily for me, I haven’t been victimized although I’m constantly bitten by them here in a country where Dengue Fever is pretty prevalent.

What you can do if you already have it: Signs and symptoms include headache, high fever, muscle pain, severe headaches, fatigue, nausea and vomiting, skin rash, and bleeding (gums for instance). See a doctor right away.

Yeast infection is a lot more common than you may think, affecting 75% of women at least once in our lives. It’s icky, uncomfortable, and can be quite painful. If you happen to be obsessed with the beach or anything that requires a bikini, you’re definitely more susceptible to it. Symptoms includes pain when urinating, cottage cheese looking discharge, pain during sexual intercourse, and most annoyingly, the itching that burns! Buzz kill, especially if you’re just trying to explore!

What you can do to avoid it: Pretty similar to our preventive measures for UTI, you can avoid vaginal yeast infections by keeping your hygiene standards down there on check.

You fell on your motorbike, you stepped on a coral, or you wounded yourself from a hike. It happens. Sometimes, it’s just a scratch, but sometimes it’s really bad. Learn your proper wound care to avoid getting it infected!

What you can do avoid it:You’re a grown up, so you know what measures to take to avoid getting wounded. But when you have it, what can you do, am I right?

What you can do if you already have it:Proper wound care is the answer. This eliminates the chances of it getting infected or getting any complication at all.

Unless you’re going to the Arctic Circle or anywhere with low temperatures, then duh, this isn’t something you need to worry about. But if you are going to be in places with extreme heat, then you’re at risk, so it’s better to be in the know before you go. Though I never personally suffered from heat stroke, I’m pretty sure I almost did. Especially for those who hike, this is something that does need to be highly considered. This is an extreme medical emergency so it definitely needs to be taken seriously.

What you can do to avoid it:The goal is to make sure your body doesn’t overheat. You want to avoid dehydrating your body. And when you’re in high temperatures and you don’t happen to be used to it, you need to take some precautionary measures.

What to do if you already have it: If someone you know is experiencing heat stroke or if you’re starting feel any of the symptoms and you’re still coherent enough to take some measures, do it as soon as possible because this is an extreme medical emergency. I repeat: this is an emergency! Symptoms include headaches, dizziness, dry skin, cramps or muscle weakness, nausea and vomiting, deep shallow breathing, and unconsciousness. You may also notice behavioral changes such as crankiness, disorientation, and confusion.

Nobody likes those little bastards. I hate them for sure, but I love nature so much that no matter what, I end up getting victimized by them. Insect bite responses can go from mild to deadly, so you better watch out. You can either have just a small bump or swelling, get it infected like I usually do, or perhaps go in shock.

What you can do to avoid it: Avoid insects. That’s all there is to it.

What you can do if you already have it:No matter how extreme your reaction, it will be uncomfortable, so it’s best to at least have some first aid packed.

Super common especially in tropical climates near the equator. The initial precaution of course is to wear sunblock/sunscreen. But I know for a fact sometimes, that’s not enough to protect yourself and somehow you’ll wind out sun burnt af, limiting your flexibility and threshold to do fun things.

Final words:We’re all susceptible to illnesses, no matter where we are. It doesn’t hurt to be careful, or to be prepared. Pack your first aid kit complete with emergency medications. Put sunscreen on. Purchase travel insurance. Don’t do stupid sh*t. Be a responsible traveler. 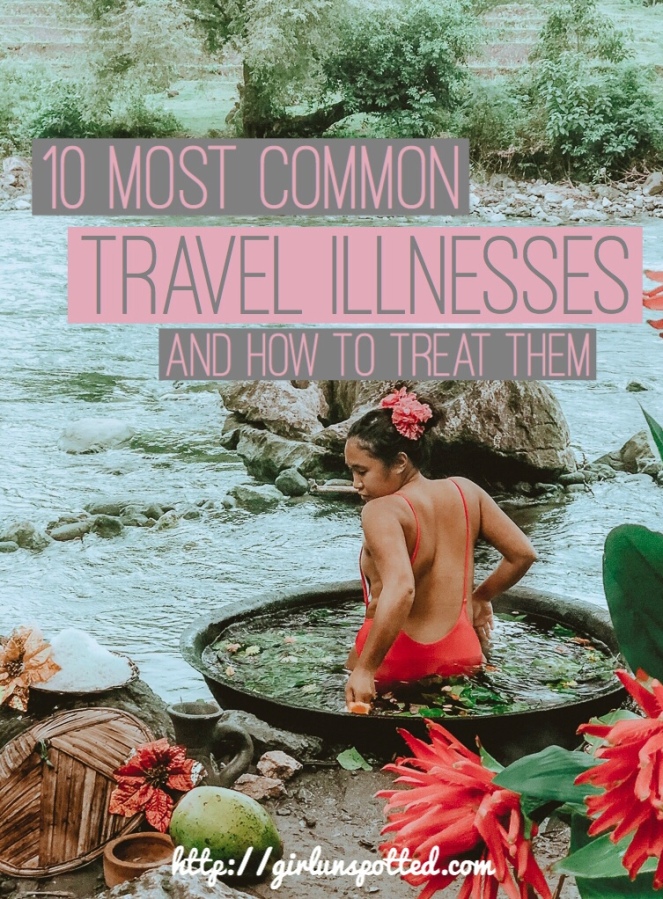 Are you following me on Facebook yet? Please do so I can keep you updated with my latest travel tales and hacks. I aim to inspire and you can find all that goodies on my Instagram and Twittertoo. See you there 🙂