Cats. It’s easy to fall in love with them. They’re sweet, they’re beautiful, and there’s something so captivating about they way they are. They move so graciously, and at the same time, they remain such mysterious creatures. It’s easy to see why everyone goes crazy over them.

They say it’s either you’re a cat person or a dog person. I’ve never had a cat, and I have the sweetest pug as a pet. But somehow, I have always identified myself as a cat. Sometimes feisty, sometimes sweet. Not everybody’s cup of tea. But still. I’ve always thought I’d enjoy cats, and that I would eventually want one of my own. Well, turns out, I don’t. And it cost me $12 SD to figure that out. 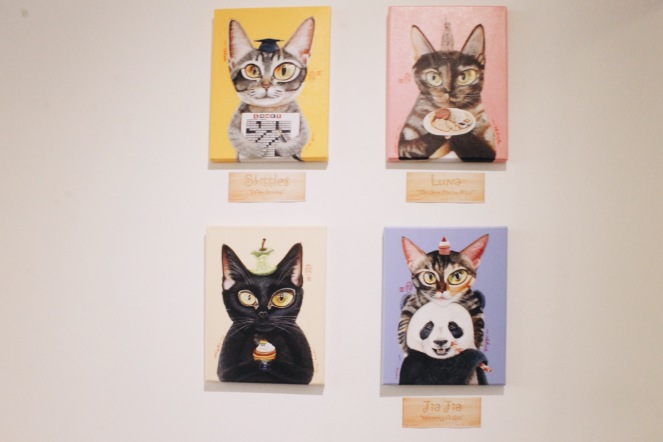 The first time I’ve heard of a cat cafe, I immediately knew I’d have to check that out. One of my guilty pleasures as a grown woman is watching cat videos. I especially find the asshole cats very entertaining. So when I found out a few years ago that a cafe filled with these entertaining creatures actually exists, I knew I had to go. Unfortunately, there wasn’t any in the Philippines. I tried looking for one in Hanoi, but sadly, it was no longer open.

I was headed to bring my husband to Singapore for his birthday, and I couldn’t resist but to ask the wise one (Google) if there happens to be a cat cafe in the city. My husband and I love dogs, but he had a cat before so I thought it was something he’d appreciate as well. Turns out, there’s a cat cafe right in the heart of Singapore. And as you already know, I had to see what the fuss is about. 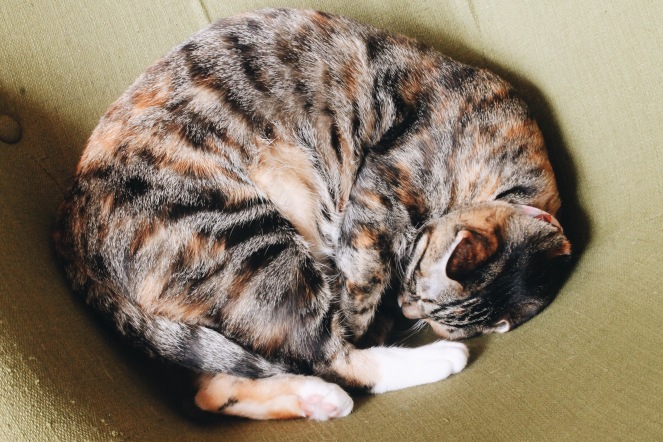 Cat Cafe Neko No Niwa is purrfectly located in Boat Quay. It’s in the second floor so it’s not entirely easy to find. But being surrounded with restaurants that serves delicious chili crab and also offers a wonderful view, the convenience of the location couldn’t be more central.

Because it’s a small cafe, they limit the customers and charge them per hour. It costs $12 for the first hour, and every hour exceeding that is an additional $5. It doesn’t include any food or drink so damn right it is quite price to pay just to be around cats. But it was the experience I was after, and I was really looking forward to go crazy over the cats. Or so I thought. It’s best to come in early to make a reservation because they get full fast. Luckily when we went, there was an opening right away. 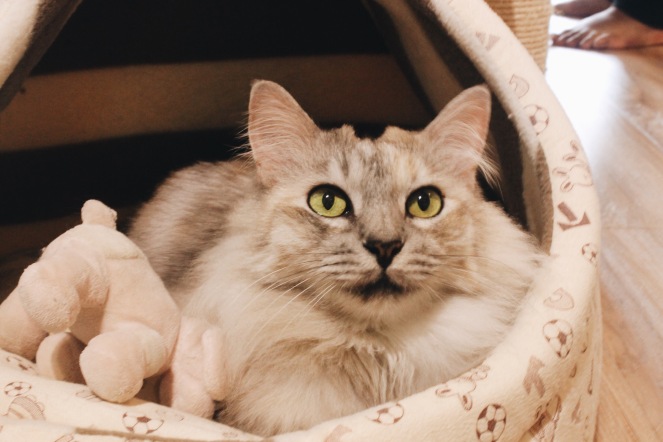 It’s a cute little place that’s obviously well kept. It’s small, but very cozy. There were about a dozen cats, and each of them has a special story. What I truly adore about it is the fact that all the cats were rescued. Some of them were in really bad condition when they were found and you wouldn’t be able to tell so because of how well they’re taken care of today. They offer drinks and desserts here but just like the rest of Singapore, everything was pretty expensive. I didn’t really felt the need to order anything because I was looking forward to devouring local food after. 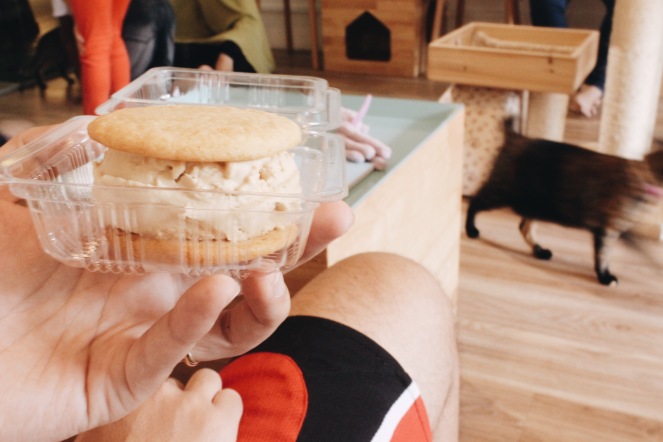 Before entering the room, they make you wash your hands and remove your shoes. You’re also briefed on how to properly interact with the cats. For instance, you aren’t allowed to wake them up. You can let them sit on your lap but you’re not supposed to grab them and place them there. I understand that cats want what they want, when they want it (like me). So it makes sense that they’re giving you precise instructions on basically how not to annoy them. 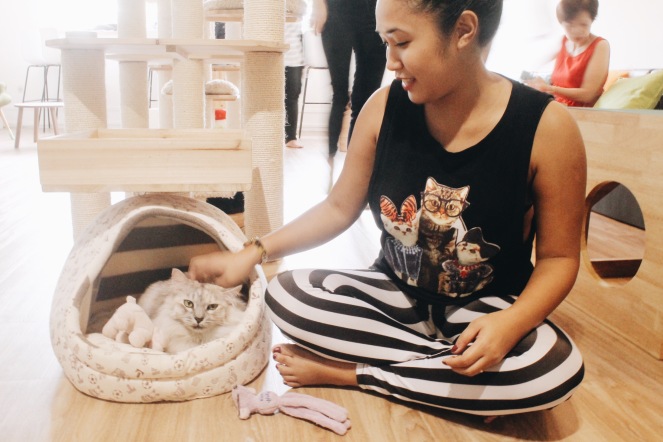 When I finally got in, most of the cats were taking their siesta and only a few were awake. Those who were weren’t really playful, as it seemed like they wanted to be left alone. I did pet some of them, but they just laid there, minding their own business, and not giving me the slightest hint of attention at all. At this point, I was already bored, but I wanted to understand cats so I lurked and lurked until they were sick of me. Maybe I was being a little clingy when I got hissed at, but cats are just so different from dogs. I like it in a way that they remind me of myself, but they’re just a little too mellow for me. In other words, they’re just not as fun as dogs!

Since it was in the late morning, most cats were asleep during those hours. So if you do try to go to a cat cafe, try going early when they’re awake so you can interact with them more. Perhaps your experience wouldn’t be as boring as mine. I mean, I didn’t really completely hated the experience, but if cats are usually like that, then I just don’t think they’re for me at all. I felt a little disappointment in myself because I grew up obsessing over Hello Kitty. How could you love Hello Kitty and not like cats? Shame on my childhood.

Maybe it takes having an actual cat as a pet to actually be captured by their charm. Or I wonder if it’s just me. We do have an outside cat that I named Mrs. Ferguson and I do find her extremely annoying. So perhaps it’s confirmed that I don’t belong in the Cat Club. But either way, a cat cafe was a fun experience that I actually didn’t mind. I’d probably go again if I’m yearning to be surrounded and interact with a lot of animals without going to the zoo (because captive ones just aren’t fun). So whether you’re a cat lover or not, cat cafes are quite purrfect for anyone who’s looking for a quirky experience. Unless of course you’re allergic.

Have you been to a cat cafe? How was your experience? Tell me down below I’m not the only one not as amused? 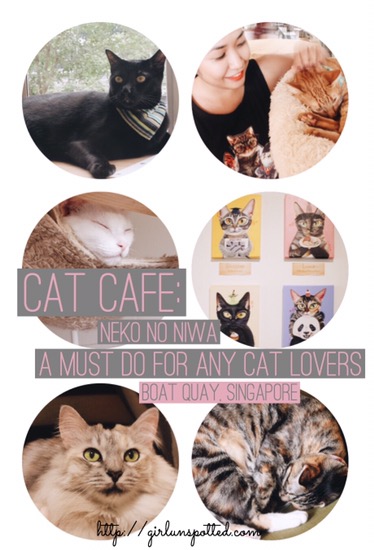