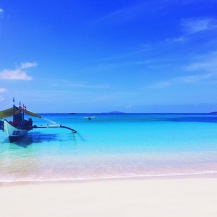 If I could turn back the hands of time, my first choice will always be Paris 1920’s, or anywhere and anytime Hemingway was at his prime. But if I had the unlimited power to keep going back to different eras, I will for sure include Boracay in the 80’s, prior to the commercialized strip and overcrowded shoreline. The days when there were no accommodations. The days when only the brave could reach the island. They days when Boracay was an actual paradise.

What if I tell you that you could go to an island today that is said to be comparative to Boracay during its virginal years? The only catch is that it’s a long journey to get to. Oh, and that you have to camp and rough it to the fullest. Would you go for it? Or would you wait until it’s more convenient? Until there’s an easier way of transportation and a more comfortable place to sleep in? Would you wait until then? Until it has become the new Boracay, spoiled and no longer pure?

If you’re not from the Philippines, you probably haven’t heard of this island yet. It’s a gem. A hidden one. And though it’s making a name for the locals, its lack of accessibility intimidates most. For a while I thought all I could do was daydream about it. I’ve heard the stories. I’ve heard of its greatness. The purest turquoise water, they said. Sand so blinding and soft, and isolation like you’ll never imagine. My affinity for unspoiled islands was getting the best of me, and I knew I had to go.

A Long Way To Go

Getting to Calaguas is no walk in the park. But being there is way beyond an ordinary day at the beach. From Manila, it takes 8 hours to reach Daet, the jump off point. You want to get there as early as possible because you still have quite a journey to go. You’ll also need to do a little shopping in the market because  there are no restaurants in this island, so you’ll be in charge of making your own food. I mean it when I say you’ll be doing everything from scratch here. From Daet, find a ride to the port where you will need to find a boat man that will take you to Calaguas, which usually costs between 2k-3k ($50-60). It takes another 2 hours by sea to finally reach the island, sometimes, longer, if the waves are wild. Going on a big group is obviously beneficial. It will cut the cost by a lot. But don’t worry, there’s a way to get to this island even if you’re a solo wanderer. Keep reading to the end.

The boat journey was long but the waves are actually cooperative that morning. The sun came out too considering it’s been sprinkling and raining the last couple of days. It was the perfect morning. And as the boat approached the island and as my anticipation ended, the water’s change in gradient became very evident as the shade went from dark blue to green, to emerald green, and finally, turquoise. Beautiful would be an understatement. It was paradise found. 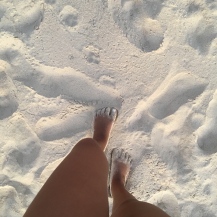 Compared to Boracay, the shoreline is smaller. My husband argues that Boracay is still nicer than Calaguas when it comes to the water and sand. I’ll give it to him about the sand, because although Calaguas sand is fine and powdery, Boracay’s remains purer and softer. The water may seem a little clearer in Boracay, but I think it’s because the shoreline is much wider and because the tide goes further. Calaguas on the other hand is just as clear, but the gradients seems a lot bluer.

There were some boats and people in the middle part of the shore, but barely any. However, we landed on the left side of the island which offered a lot more privacy and seclusion. It was quiet, empty, and the island was at peace. There are no hungover twenty somethings walking around (typical me in Boracay), no pubcrawlers stumbling all over the place, no strip of commercialized  franchises, and none of the things that ruins the authenticity of a Filipino island vibe. It was pure as it can get, and the island’s innocence is so intoxicating. Its rawness took over me as I laid in the sand with my face to the sun. Solace, I thought to myself.

There is no competition when it comes to the overall island experience. Calaguas wins. 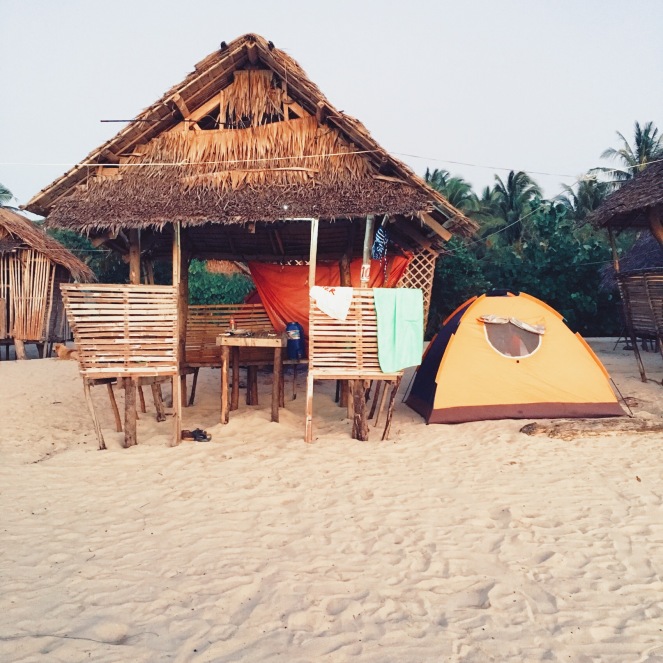 My husband and I takes Valentine’s Day seriously. We’ll never be too cool for it. We’re not hopeless romantics. Everyday is not Valentinems Day for us because we kinda go all out for this. We get dressed up, I brush my hair, and go to grown up places for dinner and sometimes, watch a grown up show like, Cirque Du Soleil, or something amazing like that.

Needless to say, camping on Valentine’s was going out of our comfort zone. We’re not new to camping and we’ve done many times. We’re no amateurs when it comes to roughing it, but doing it on a valentine weekend is a novelty to us. The rose petals and fine dining were replaced with sandy cuddles and fresh local food. And guess what? We loved every bit of it. 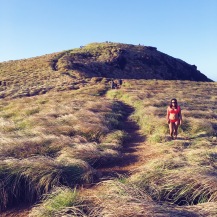 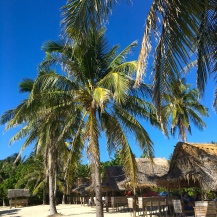 We spent the day frolicking in the water and kayaking our way around. In the afternoon, we did a little bit of snorkeling and took the boat to the other island nearby to do some hiking for a great scenic view. Everywhere you turn in Calaguas seems to be picturesque. With its rustic island charm, it’s hard not to fall for it. Being there was just divine. We watched the sunset, counted the stars, and released floating lanterns at night time. Although we’re running on barely any sleep, exhausted from a long trip, and sweating from the heat of the sun, we were having an incredible time. This has become the new idea of romance for us.

How To Hack Calaguas

There’s no way it would have went as smoothly as it did if we didn’t have help. We would have probably bickered the entire Valentine weekend if we had to run around looking for people to split the boat charges with. We would have given each other the cold shoulder while one of us (him) unsuccessfully attempt to build a fire. We would have slept separately if we tried to pull a DIY trip.

Thankfully, we didn’t had to go through the struggle. The secret to a stress free Calaguas trip is simple: get on a tour! Now I’m not the type to rely on group tours, because waiting around for other people, plus all the other inconveniences, is just not my cup of tea. But with long trips like this, a group tour is actually quite a genius idea.

I went with Hullaballoo Tours, which is the original organized tour in Calaguas. Including the bus tickets, it cost 3000 php  ($75) each. From what I’ve heard, it’s the best. They made every bit of the trip so much easier for us. The bus tickets, the transfers including the boat, the tent, especially THE FOOD, were all taken care of. They also have the biggest boats which makes the journey faster and more comfortable. The tour had their own clean bathrooms and our own private corner. That way, we still had privacy, away from the other big groups in the middle part of the island. The meals for the entire trip were taken care of, and they were actually really good! Have you ever had authentic Bicolano food? No? You’re missing out! Compared to other group tours, they had a generator than ran from 6pm until midnight, so we were able to charge our phones. They even had a mobile bar that served local (and not very appealing) alcoholic drinks from 8pm until bed time. And best of all, the crew and the people we met are incredible. In other words, it was very much worth the money.

Why Go To Calaguas Now?

Calaguas is getting a lot of fuss now with the locals. It all starts there. Tourism is booming, and the fact that the Internet makes it easier to spread information (thanks to blogs), people will keep flocking to the island. With the demand increasing quickly like that, more boats will be built, and more tours will be available. When I was talking to the crew of our group tour, they mentioned that national TV channels are already approaching them to host summer events in the island. In a few years, if people focuses only on the opportunity instead of the rawness of the island, electricity will be generated permanently, and then resorts will be built. Next thing you know, you’ve got a McDonald’s in there. Okay, maybe it won’t happen, but with Boracay’s present situation, who’s to say what the future of Calaguas would be?

You need to go now because it’s still unspoiled. Because sometimes, sleeping under the stars is far better than a five star accommodation. Because getting lost in serenity is always a good idea. Getting there is an adventure, but it’s also what makes this trip so authentic. So go. Go before everybody else does. Go before it’s featured on NatGeo. Go before others ruin it. Just go.

Edit: A friend who went there this past weekend already complained about how extremely crowded it was because of an even for Labor Day. The word is out already. Go before it’s too late!

Disclaimer: I was not paid nor compensated to write this. 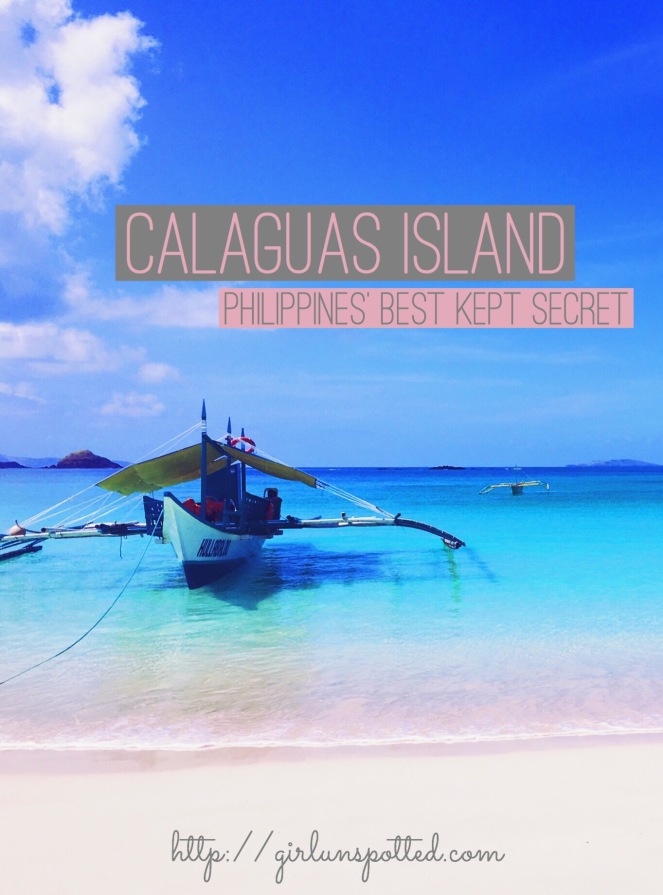