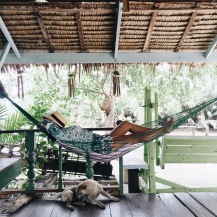 This post is made possible by Take Me Tour.

Fact: Thailand is by far my favorite country. Call me a cliche, but I literally cannot get enough of the Thai culture, the food, and every beauty the country has to offer. I haven’t seen all its cities, provinces, and islands, but trust me, I’m dying to see them all. Since Bangkok is basically the gateway of Southeast Asia, I’m just not able to resist spending a few days there.

I had three full days in Bangkok after my two-week Myanmar trip. I love Bangkok and there’s always something to discover there, but I knew I wanted to get out of the city for at least one day. And being such a vast country, almost every corner away from Bangkok has something incredible to offer. I’ve been to Pattaya and spent a day beach bumming in Koh Lan island before. I’ve already ran around the temples of  Ayutthaya, Thailand’s ancient capital. I’ve also been to the largest floating market, which to be honest, was quite a tourist trap. I wanted something more offbeat, to do something without feeling like a tourist. I wanted to explore like a local as eagerly as possible.

Then I’ve heard of Take Me Tour. Contrary to most tours available to this day, Take Me Tour gives you more of a local experience and takes you to Thailand’s hidden gems away from other tourists like ourselves. Instead of being dragged around by a tour guide with a microphone and brochures, you’re exploring places with a local guide, or local experts as what they’re called, like you’re buddies. You know when you’re visiting a friend in their city and they take you around? It’s like that! So it’s more like having a travel buddy than a tour guide, pretty much.

Booking the tour is easy as you can do it online, but the hardest part was picking which one was the best for me. There are so many amazing day tours available in the outskirts of Bangkok. I wanted to go for a day tour because I felt like anything longer than that would just be too short for my time in Bangkok. That’s what’s so good about day tours though, you don’t need to allot too much time to explore a place. One particular thing that caught my eye was the Maekhlong (Samut Songkhram) cycling tour around the coconut farm. A coconut farm, floating market, a tour around Maekong river, and the Umbrella market, which I haven’t been to yet, sounds like my kind of fun. But there’s only one problem– I don’t know how to ride a bike! Wtf, right? Anyway, that’s not the case. The point is, when I messaged Ann, the local guide offering this tour, she told me it wouldn’t be a problem at all. BAM! So we set a date and a meeting point and that’s was how easy it was to process the booking.

We met at the Victory Monument BTS stop at 7:30 in the morning. I know I’ve been to the province before when I went to Damnoen Saduak floating market, so I knew it was going to be close to two hours to reach our destination. We had breakfast underneath the station, which was delicious as always, because you know, Bangkok. The van terminal was also right under the BTS so it wasn’t too hard to find at all. Ann, my local guide, was just lovely. She spoke good English and she told me what to expect. Turns out, we won’t be cycling anymore, but instead, her friend will be giving us a lift on his jeep.

By the time we left Bangkok, it was so gloomy. I was definitely trying to put out positive energy in the universe because it would have sucked so bad if it rained. And well, the universe (or luck) was on my side because by the time we reached Maekhlong, it was bright and sunny! Our first stop was an ancient temple called Wat Bang Kung, consumed by tree roots reminiscent of Ta Prohm temple in Cambodia, though it’s not nearly as impressive. It looked like it was being renovated, so there wasn’t any wow factor to it. So soon after, we headed out to the coconut farm. 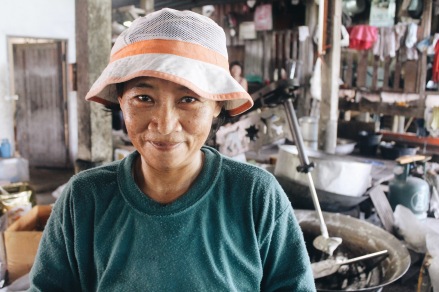 Rows of coconut trees filled the province. Similar to the Philippines, coconuts are practically everywhere here in Thailand. (Yet somehow, it wasn’t until recently that I discovered coconut oil’s magic powers.) We stopped by Ann’s friend’s farm and there they introduced me to the process of making coconut sugar. The coconut sugar tasted familiar, though I’ve never had it before. It tasted sweet, just like candy!

After cruising around and strolling around in the coconut farm, Ann brought me to a floating market. I was afraid she was going to bring me to Damnoen Saduak, but as a local who truly knows what’s up in the area, she took me to a much smaller one called Tha Kha Floating Market. I actually loved this one a lot too. It’s small, but very intimate. There were some tourists, but not as dominant as they are in other floating markets I’ve been to. It’s quite local here, and as we cruised along, it seemed like we had the canal all to ourselves. It was pure serenity as we sat on the boat, as Ann told me stories about where she grew up and how she ended up in Bangkok. 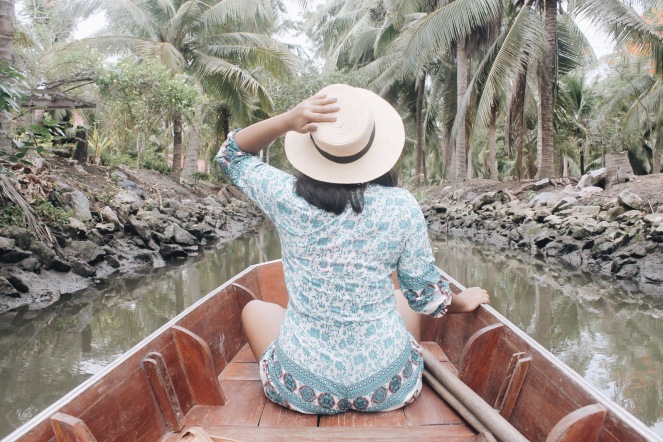 We had lunch right by the river where I had my favorite, Tom Yum soup. Then we found a cafe right by the river as well where we chilled and relaxed for an hour. We hung out there as Ann and I shared stories about our travels. She showed me photos of her previous trip to Pakistan, and I told her about Myanmar. It was wonderful hearing her stories, and being able to learn about Thailand from the eyes of someone who was born and raised there. I’ve been to Thailand a few times, but this is the first time I really had the chance to get to know it with a local.

Processed with VSCO with a6 preset

Before heading to Umbrella market, we stopped by to visit Ann’s friend in Maekhlong Camp, which is similar to a homestay, located right next to the river. We were supposed to cruise around the river that afternoon, but because we were trying to catch the train passing by Umbrella market, we didn’t had enough time. Instead, we dedicated our time to solace and relaxation. This place is so lovely!! I loved the very short time I spent there. The breeze is so inviting especially with the comfortable hammocks right by the river. We ate some fresh guavas as Ann told me more about this place. Ann asked if I wanted to camp there that night and be surrounded by thousands of fireflies. Seriously, I just got invited by locals to stay over and although the sound of huge crabs for dinner almost got to me, I did have plans the next day that required me to be in Bangkok. I already regretted it the instant I declined the offer. Until now, I do. 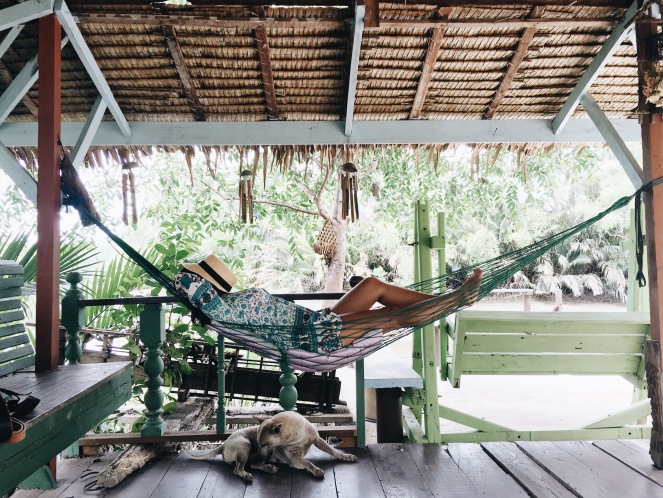 Finally, we headed out to Umbrella market. If you watch a lot of travel documentaries or some Anthony Bourdain, then you might be familiar with this. Needless to say, this was a pretty popular stop in the province and tourists come to try to catch the train pass by the market. Okay, let me fill you in. Basically, Umbrella market is literally on the train tracks and when the train passes by, the vendors move their stuff away and then set it right back as soon as the train’s gone. It’s like a domino effect, and it was quite something to witness. Though there were lots of tourists waiting around for the train, most of the shoppers in the market are locals that still added a pinch of an authentic vibe. I mean come on though, it’s a market right on the train tracks. What kind of authenticity am I really looking for, right?! It was insane, and the train was literally a foot away from human beings. It was definitely one for the books. 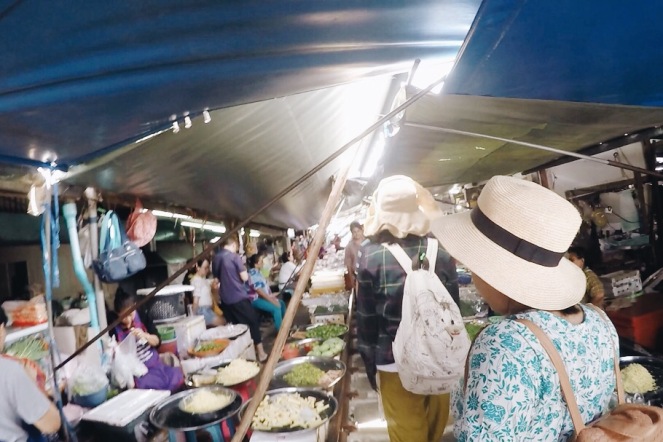 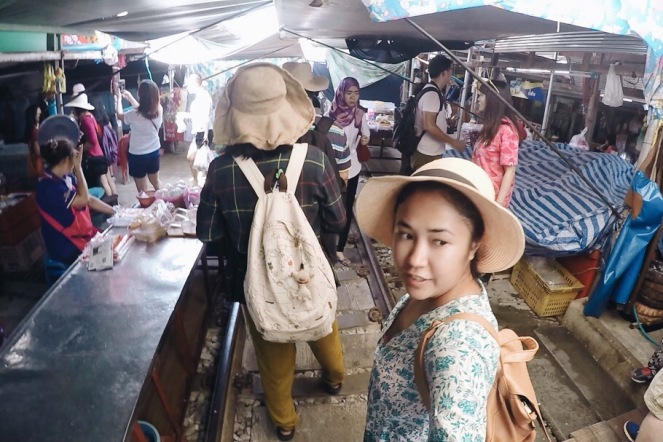 I ended my day with a cup of Thai iced tea as big as my face, and some street food that I ate on our ride home. It was such a spectacular day. Not only did I get to see a piece of Thailand’s local culture, but I also made a friend. This is the best thing about Take Me Tour. You’re not going on a scripted, formally organized tour. You’re going with a local, like a friend, and in a way, you’re kind of winging it. There I was getting invited to even stay the night. That’s not something that happens when you go on other typical tours. You’re getting to know a place with personal stories instead of things you can easily read in a book. You’re learning things that only locals really know about, instead of places that are easily found on a Google search. Most of all, you’re actually connecting with your guide. Just like how you do when you’re traveling with a friend. And you know what, as someone who’s been traveling solo for a couple of weeks already, it’s always a pleasure to have a travel buddy around. With Take Me Tour, you just never know what adventure could happen next.

Do you like traveling like a local too? Or exploring a place with a local travel buddy? How was your experience? Share your thoughts down below!

Disclaimer: Thank you so much to Take Me Tour for inviting me on a day tour in return of a review. As always, I only write about things and recommendations I know would be great for my readers.